Start a Wiki
Reika Sata (佐田 怜香 Sata Reika) is the daughter of Hitomi Sata and the older sister of Kyouya Sata who he doesn't talk much about because she only returns home once or twice a year.

Reika is a very beautiful young woman who is considered attractive that guys will go to talk to her wherever she goes with shoulder-length dark red hair that is swept to the right, sky-blue eyes and she usually wears nice clothes that it suits her well.

From what Erika Shinohara had stated, Reika's attitude is worse than Kyouya Sata's attitude as she would harshly talk to the guys who tried to pick her up, in which she said that she hates men the most and she said that they treat women like fools.

From what she said to Kyouya, she cut Kyouya's clothes in to ribbons before last time.

Kyouya is Reika's younger brother who is often seen to command her brother to do things and Kyouya would obey as she cut his clothes before when Kyouya doesn't obey her.

She can't believe that Kyouya was serious about Erika as Erika is an average girl and Kyouya is a very good looking boy.

It appears that Erika is very nervous when she is with Reika and she would act nice or smile often in front of Erika. Reika challenges Erika when she disagrees about her view of Kyouya. Later, she invites her to go with her and Kyouya to Kobe to visit Hitomi Sata (Reika and Kyouya's mother).

She has since become friends with Erika and appreciates her changing Kyouya for the better. 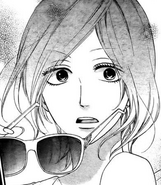 Reika in the manga
Add a photo to this gallery
Retrieved from "https://ookamishoujotokuroouji.fandom.com/wiki/Reika_Sata?oldid=6503"
Community content is available under CC-BY-SA unless otherwise noted.